In Japan, vinegar or ‘su’ (す, 酢) has long been trusted for its myriad of health benefits. Samurai warriors reportedly drank it to relieve fatigue and for an energy boost. More recently, ‘diet' vinegar-based beverages became very popular in Japan to help with weight-loss. However most of us know vinegar as an essential cooking ingredient in the Japanese kitchen, where it is used to make a variety of vinegared dishes (sunomono), pickles (tsukemono), simmered dishes (nimono) and in marinades to neutralise strong fish odours and to tenderise meats.

Rice vinegar is one of the most popular varieties consumed inside and outside of Japan. It is a light bronze colour and has a less harsher taste than white vinegar and cider vinegar, which suits the delicate flavours of Japanese dishes. Rice vinegar made from only fermented rice is known as jun kome-su (純米酢), i.e. pure rice vinegar. However cheaper versions which include other additives are also available. Rice vinegar is used in salad dressings, marinades, pickling and is essential for most dipping sauces.

When the Japanese refer to ‘su’, they often mean kokumotsu-su. It is made from a blend of grains and sake lees (the fine sediment left after the sake making process). Kokumotsu-su has a pale-yellow colour and is milder than regular rice vinegar. Its plain and refreshing taste is best suited in marinades, to make sushi vinegar, salad dressings and in pickling. It is also used as a household cleaning agent due to its strong antibacterial properties and low cost.

Sushi-su, also known as seasoned rice vinegar, is standard rice vinegar with sugar and salt added to it. It is mixed into plain boiled rice to make sushi rice. As it is a very mild vinegar, it is often used in salad dressings. It can also be used in marinades and to make a quick dipping sauce. Although shop-bought versions are more convenient, they often contain fructose corn syrup, MSG and other chemical additives, in addition to salt and sugar. You can avoid these by making your own sushi vinegar at home: simply mix 4 tablespoons of rice or grain vinegar, 2 tablespoons of sugar and 1/2 teaspoon of salt. A powdered form of sushi vinegar, sushi no ko (すしのこ) is also available. It has a stronger flavour than liquid sushi vinegar and is simply sprinkled onto hot rice and mixed in.

Also known as brown rice vinegar, it is made from brown (unpolished) rice. It is light to dark brown in colour and is reputedly richer in flavour and nutrients than white rice vinegar, and can often be used in place of it. Vinegar produced from only brown rice is called jun genmai-su (じゅんげんまいす, 純玄米酢) i.e. pure brown rice vinegar. It’s mellow flavour is a delicious addition to salad dressings, marinades and pickles.

Japanese kuro-zu, which literally translates to ‘black vinegar' is made from unpolished brown rice and has a mild, sweet flavour. It should not be confused with Chinese black vinegar that is produced from black glutinous rice. Unlike the other rice vinegars which take between 1-3 months to produce, kuro-zu is fermented outdoors in ceramic jars for between 1-3 years. The longer the fermentation process, the milder the taste, the deeper the colour and the higher the amount of vitamins, minerals, and amino acids that develop, thus contributing to its high nutritional content.

Kuro-zu has always been highly regarded for its medicinal properties, and it is consumed daily by many as a health tonic. It's health benefits include lowering blood pressure and cholesterol levels, relieving fatigue and sore muscles and improving digestion. However its popularity grew as a weight loss product and this is responsible for the boom in vinegar drinks available today. You can can find a large selection of fruit-flavoured black vinegar drinks in most supermarkets. Often these are diluted with water or juice before consumption, although Mizkan does a range which can be consumed straight from the bottle. Kuro-zu can also be used in salad dressings, marinades, pickling mixtures, sauces and dips.

Fruit vinegars are made from ripe fruit that is crushed, fermented and acetified. The trend of consuming vinegar-drinks to boost one's health and energy has led to the creation of a large variety of fruit vinegar beverages in Japan. Some department stores even have vinegar sommeliers. Besides the usual apple cider vinegar (りんご), other flavours include: blueberry (ブルベルー), pomegranate (ざくろ) and plum (うめ) to name a few. The fruit vinegar can be consumed by stirring a tablespoon into sparkling water, tea, fresh juice or a smoothie. It can also be enjoyed as a dessert by spooning it over some yoghurt or ice cream. For convenience, diluted fruit vinegar beverages that can be consumed straight from the bottle are also widely available.

Enjoy experimenting! Here is some useful kanji to help you along the way: 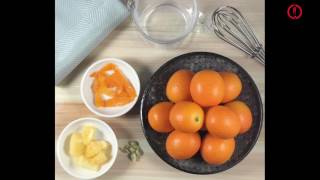